So, my daughter has decided that she doesn't like math.   In hopes of encouraging her to enjoy math more I have been seeking more living math ideas to add to our usual workbook.  It has been working quite well and usually she has no idea that she is doing math.  One night she overheard me explain to my husband how i was "sneaking" math into our school day.  The next day Esther insisted that we do more sneaky math. I giggled inside that even though she knows its math, as long as it is "sneaky" she wants to do it.  Here is one of her and my favorites.  Pattern blocks and the Pattern Animal Puzzle Book. 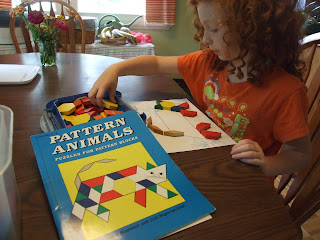 The book has one animal for each letter of the alphabet which can be filled in using pattern blocks.  But it also has several different activities to then use the blocks and animals pictures for.  It covers several different math concept including, sorting, patterns graphing, comparison and many more things. 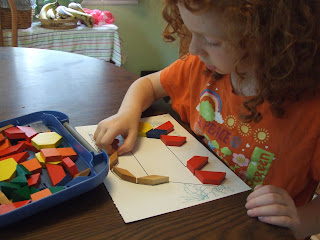 On this particular day first she had to fill in the picture of the jaguar. Then she had to create a frame around the entire picture using any blocks she wanted and in any way she wanted. 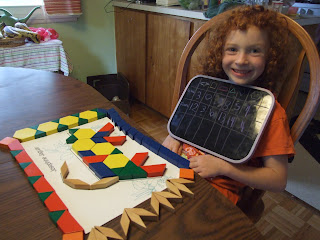 Then we counted how many of each block was used for the picture.  Then we did it again for the frame. We put it all in a chart and compared the picture with the frame to see which one used more of each block.  As you can tell this was a BIG hit with Esther.  With the different pictures and all the different activities we can easily do one of these a week for the next year and not get tired of it.

By the way, I got my copy through Paperbackswap. I have received several homeschool books through this service and always check here first when looking for a book.