This is my first post to Tot School. I've been doing it for a while now, but it took a little bit for me to figure out how to write a blog. My daughter "Star" is now 26 months old, and here was our week.... We started out doing a lot of imaginary play but unfortunately I didn't have my camera so I don't have many pictures. We played doctor and fixed up several of her dolls. We also played with her paper doll set as well as her snake and her lizard(see previous posts). I was able to get a picture of her exploring a "cave" a.k.a. the dining room table. 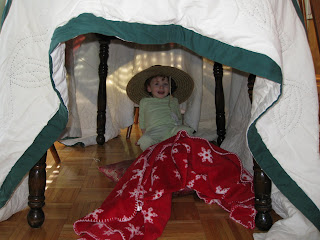 I introduced several new Tot Tools. My father made this one out of a scrap of wood and some nails. Star loves to stretch rubber bands over the nails 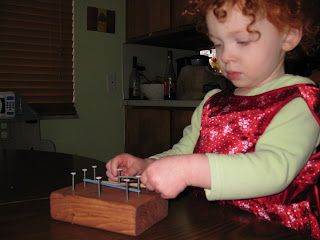 My father also made this tool. I got the idea from here. The hardware didn't cost much at all and I think she loves to use it because she's using real equipment she has seen me and her father use. 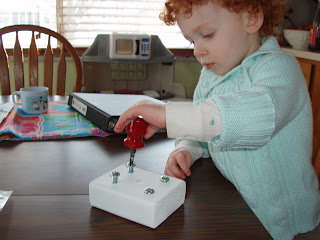 I finally was able to make her a set of Bottle Top Names. Basically I had to wait until I had enough bottle tops. I plan on adding more names as I get more bottle tops to keep Star interested in it. And Yes she is wearing a Christmas dress over her pajamas. She insisted. 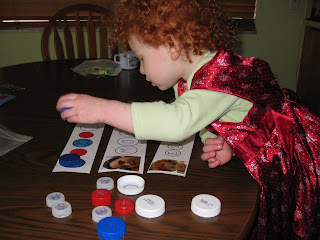 We also did several crafts. Here is a monkey for the letter M 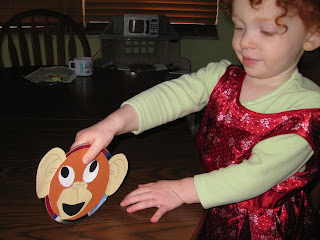 We also did spaghetti art. Basically you overcook spaghetti, let it cool, then lay it on a piece of paper in different designs. We also worked on a few of our letters with the spaghetti. 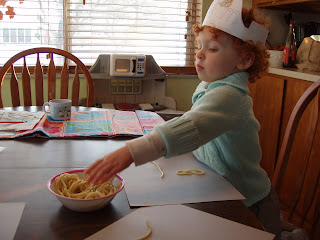 And then we ate the spaghetti. Star really enjoyed it, and so did I since there was very little mess. 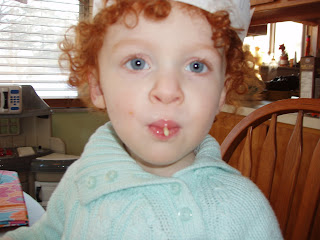 For our other project I drew a simple picture of a tree with a sun, clouds, and flowers. We ripped up pieces of tissue paper, crushed them into a ball, dipped it into glue and put it on the picture. 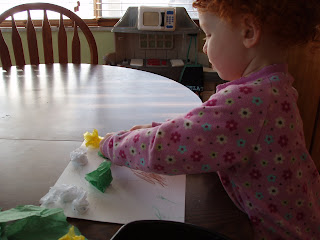 Some of our other activities included stringing foam beads from the dollar store, 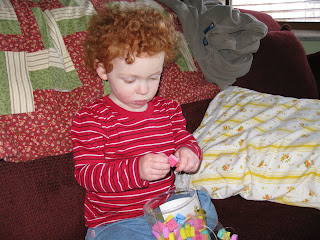 Playing Alphabet Land I got from the Goodwill 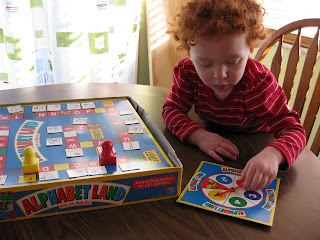 We sorted shapes on her felt board 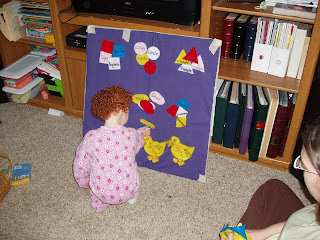 I also made a relay race where Star had to carry homemade pompoms, bean bags and various other balls on a spoon and drop them into a laundry basket. 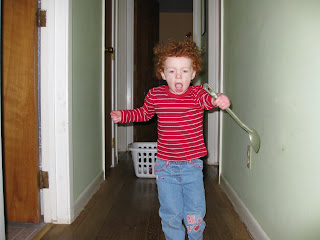 And finally I gave her a tub with smaller tubs of water, eyedroppers, sponges, spoons, etc. Basically anything I could find in the house that can be used to move water from place to place. Then I just sat back and let her explore. Thanks to The Four Little Penguins Blog for the idea. 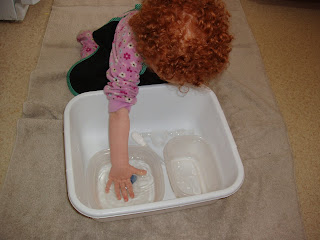 All in all, another great week. Now its time for a nap.
To see what other Tot Schoolers have been up to check out the website for 1+1+1=1
Posted by Jennifer at 6:19 PM