The past two weeks has been filled with sickness, broken cars and broken computers. This all adds up to one really short post about Tot School, but I wanted to at least share the little we did. Unfortunatelly the computer is still broken so I don't have the links to where I got my ideas from, sorry.
We read the book Mouse Paint which came in a package from our library which also had these great color chips so that you can mix the colors as you look through them. Star Loved it.

**I have a great picture of this on the other computer, whe we get it back, I will add it in**

We also painted with red and yellow. First we did marble painting by rolling marbles in the paint, then dropping them into a tub with paper on the bottom and letting them roll around. We also did some free painting. 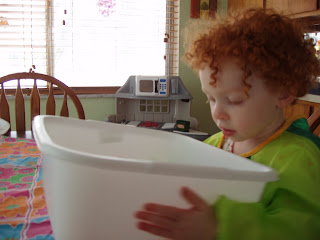 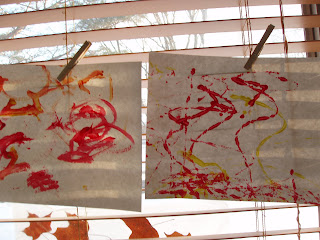 For blue and yellow we made a bubble bottle. We took a plastic water bottle and added laundry detergent and water to it to fill it about half way. I then added blue and yellow food coloring. (I have heard that the colors are brighter if you use tempura paint) 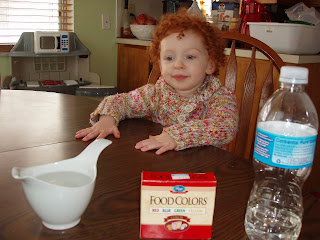 I then hot gued the top on and let Star shake it, producing wonderful green bubbles. After a little bit, the bubbles start to dissapear, letting Star (or Mommy) have the joy of shaking it all over again. This bottle is still rolling around the house a week later. Whenever one of us finds it we shake it and are mesmerized by the bubbles at least for a few minutes. 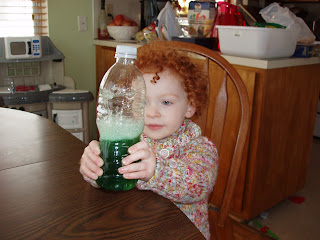 Unfortunetly the sickness over took us before we could play with red and blue, but I would love to hear if anybody has any other great ideas to demonstrate how to mix colors.

The only other things I have to share is a fishing game I made. I have seen on many other blogs some wonderful puzzles or games that used magnets to let the kids "fish" for different articles. Alas, we do not have one of these, so instead I made my own. I just found a graphic of a fish I liked and copied several times on a page. I used Microsoft Word, but anything would work. After printing, I cut them out and wrote one letter of the alphabet on them. I laminated them and attached paper clips. We happened to already have a fishing pole with a magnet attached to it, but you could use a stick, some string and a magnet. Star enjoyed this a lot. I think I will make some with numbers next. 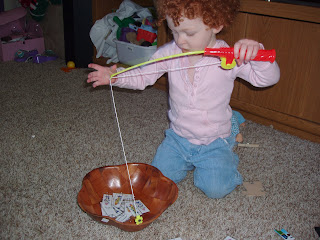 The rest of the two weeks was pretty sporadic. Luckily Star didn't get very sick, but Butterbean and I did. So what I ended up doing was setting up our dining room table with stations using various Tot tools or art projects which did not require supervision. This way I could collapse on the couch or take care of the baby, but Star still was getting the stimulation she needs. Here's a picture from one day. 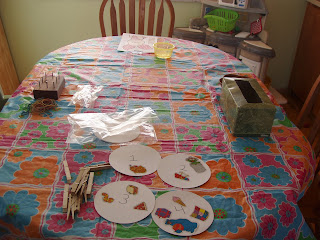 Finally, I wanted to just show this picture becasue I think its adorable. With all the sickness in the house, Star appointed herself "doctor" for everyone who was sick, which in her mind was everyone and everything. The Cat was sick, Mrs. Potato head was sick, the baby doll was sick, etc. Here she is taking the baby dolls temperature. 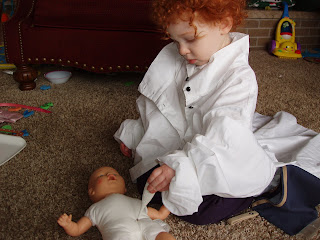 I just love her imagination.
I hope your week was better than ours to see what other have been doing click on the Tot School graphic at the top of the page.
Posted by Jennifer at 10:48 AM